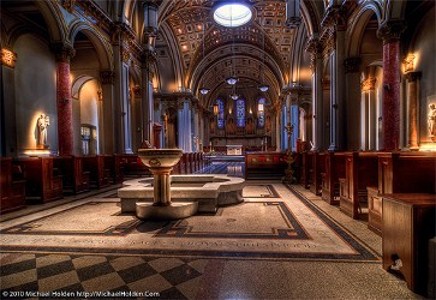 There are two liturgical misunderstandings that occur every December.  The first is about the Immaculate Conception; the second is about the rose colored candle on the Advent Wreath.  These are pretty common things, but some how both cause many debates that have to be settled by the priest in the sacristy before Mass starts.

For the Immaculate Conception, a lot of people think we are celebrating Jesus' conception.  The arguing usually starts the Sunday before the holy day when pastors remind the faithful that they are obligated to attend Mass on December 8.  The Gospel reading for the day also adds to the misunderstanding since it's the account of the Annunciation of our Lord, but this makes sense since Mary's conception isn't found in Sacred Scripture.  Referring to His conception on this day is a good thing, since true Marian devotion always points us to her Son.

It's neat that the Immaculate Conception is exactly 9 months from the day the Church celebrates Mary's birth on September 8.

Here is the promulgation at the end of Ineffabilis Deus from Pope Bl Pius IX on December 8, 1854:

We declare, pronounce and define that the doctrine which holds that the Blessed Virgin Mary, at the first instant of her conception, by a singular privilege and grace of the Omnipotent God, in virtue of the merits of Jesus Christ, the Savior of mankind, was preserved immaculate from all stain of original sin, has been revealed by God, and therefore should firmly and constantly be believed by all the faithful.

Incidentally, the holy day is celebrated as The Conception of the Mother of God in the Womb on December 9 in some of the Eastern rites. Leave it to them to be really wordy, but at least there's no misunderstanding!

Now to the rose colored candle on the Advent wreath. For some people, there seems to be a hesitancy to light this candle on the Third Sunday of Advent, which is when it is to be used. The temptation is to save this candle for the 4th Sunday in Advent, since that's the last one before Christmas.  The 3rd Sunday in Advent is traditionally known as Gaudete Sunday, getting its name from the entrance antiphon of the Mass which starts: "Gaudete in Domino semper: iterum dico, gaudete."  Which translates to: "Rejoice in the Lord always; again I say rejoice."  The readings for the day also take on a more joyous tone than the other Advent days.

In a lot of Catholic colleges and universities, this Sunday is often treated like a "mini-Christmas" since it is the last Sunday before the students left for winter break and no one would be at the school on Christmas Day.

Unfortunately, some places forgo the use of the rose color. (They might have 4 violet candles on the Advent wreath instead of 3 violet and 1 rose).  While I'm not a fan of this, I can see why since there are only two days in the liturgical calendar when rose vestments are worn: Gaudete Sunday and Laetare Sunday (the 4th Sunday in Lent).  Purchasing and keeping rose vestments can be rather impractical for only two days of the year.  I also know a few priests/deacons that really dislike the rose color since it's pretty much pink.

I don't believe that people who carry one or both of these misunderstandings are bad Catholics- it just goes to show that as the Church, we still have a lot of catechesis to do.  Job security, I guess!

The opinions expressed by the blogger, those providing comments, and the blog's advertisers are theirs alone, and do not necessarily reflect the teaching or positions of any part of the Roman Catholic Church.